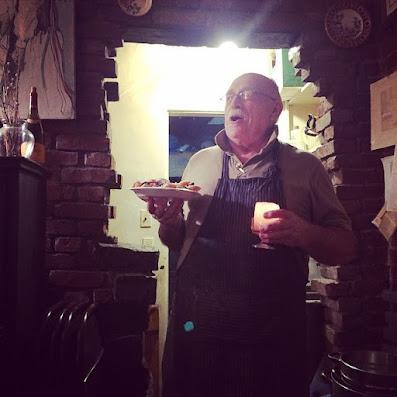 As the editor of a blog about convention cities, I used to attend one or two conventions every year. One of my most memorable times was at dinner afterwards.

It was at a Hungarian restaurant in one of Pittsburgh’s less populated neighborhoods. The restaurant, Jozsa’s Corner, has since closed; it stood on a corner and resembled a rusted old apartment house. It turned out that a group our size had to share a table with another group. This was fine, enjoyable, in fact, in that I started talking to someone who told me about his experiences in a college in Iowa that I’d just started researching for my daughter.

There was a piano behind our table and when I asked if it could be played, the proprietor, cook and waiter, Alexander Jozsa Bodnar, came out and offered to dance. His confession was that this was one of the reasons he installed the piano – perhaps, even started the restaurant, and it was heartwarming to hear.

Before the night ended, we got to watch his jig, and I got to play the piano. All my senses were engaged for a memorable event.

The city of Minneapolis is another place that hopes to offer this magic to convention planners.

The head of the convention bureau for Minneapolis, Melvin Tennant, CAE, said this much at a summer preview event I was invited to.

“Attendees want an authentic experience when they visit,” he said.

This also means mixing with the locals. The problem is that there are many who may never return downtown since Covid-19 hit preferring to work at home. There are also suburbanites who don’t necessarily work in the city, but who in the recent past filled the streets for sports, theater, music or otherwise, just go out and some of them are still missing, many say, due to safety concerns.

“They are some of the toughest critics,” Tennant added.

To help build more critical mass downtown, a coalition of city organizations that includes the convention bureau is promoting a raft of fun events downtown this summer. Events include many music, theater, and sports offerings, of course, but also sidewalk art events and farmers markets. Most interesting to me is a string of sidewalk pianos with preset times for professional entertainers, but at most other times, anyone like me can play during the month of June.

Turning the streets into a virtual amusement park is something new for me. As a kid living in the suburbs of New Jersey in the 70s, we did not visit New York City for fun. My grandfather had a doctor’s office in Brooklyn below his apartment, and if I was dropped off there because my mom was desperate for a babysitter, I wasn’t allowed to leave. He would remove the channel changer on the television, and I was forced to watch several hours of Wild Kingdom in slow motion.  As a family, we’d visit Gooder’s shoes, owned by Mr. Gooder, a friend of my grandfather, for free shoes. There was a butcher we’d also visit who decapitated chickens in the store and left the heads in a barrel for all to see. It was not the fun place it is today.

In Minneapolis, pianos can be found at various locations throughout downtown, but the majority are on Nicolette Avenue – the thoroughfare that received more than 50 million in upgrades in recent years. I went downtown on my bike to check it out. 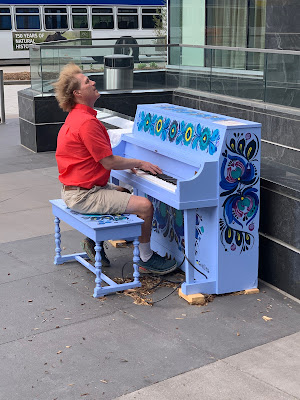 On the corner of S Washington Avenue to the side of the just opened, glimmering Four Seasons Hotel - the only five-star facility in the state - is the first outdoor piano on Nicolette Avenue that anyone can play in June.

Bikes must share Nicolette Avenue with buses and also with scooters and skateboards, but I think it’s great that no cars are allowed. Passing me going the other way, a bike rider much younger than me does a wheelie, and I think he’s pretty good even as he goes through a red light.  I stop to gather with a group watching a giant chess board on the sidewalk. There’s a multi-cultural mix of well-dressed and not so well dressed who seem of seriously into the watching the game. Behind us is an office for the for Minneapolis Downtown Improvement District (Mpls DID). One reason Minneapolis attracts conventions and visitors is because of its downtown and the DID’s mission is to supplement these efforts with an army of  DID Ambassadors, the most visible part of their programs.

Further up, I befriend a DID ambassador we can call Joe, who told me things are picking up downtown, especially because of the conventions. I asked about safety, and he said the weekdays seem fine, but he was not so sure about weekends.

I slid off my bike and cross the street to a hot dog vendor whose cart is open Monday through Friday and sometimes, weekends. He says days when the conventions are around are the best.

The number of people hanging out starts to increase across the street from The Mary Tyler Moore Statue on 7th and then increases again two blocks up across the street from the Target downtown, but in my trip, it’s the start of rush hour so the number of people hanging out are matched by workers heading home with their briefcases or backpack slung over their shoulders.

Across Nicolette Avenue, every seat outdoors is taken at the popular watering hole The Local, and there's a new place, Ties Lounge and Rooftop, with multiple floors.

I try the piano in front of the YWCA. It’s a Wurlitzer Vertical Grand according to the label, and I'm expecting big things. Two young professional women talking and chatting look up from their phones. I realize the whole process is somewhat addictive, first finding a piano and secondly playing them and finally, wondering if anyone will listen.

I start to notice the badges for the Conference on Mass Spectrometry which is going on all week and decide to head up to the main stage which for me is in front of the convention center. Up there, no one is using that piano; it’s free. Although I’m just an aspiring professional, I realize this is a big opportunity. I put on my game face and start pounding the keys with my right hand, jazz chords with my left, as the attendees stream out of the convention center.

I get a few furtive looks, but one or two outright smiles as people walk by. A few people sit on the benches nearby and check their phones, and one sits right behind me and claps.

He called the conference the Super Bowl event for the spectrometry industry which studies the interactions between light and matter, and he is visibly excited by its success. I bring up the city’s presentation as a destination, and he couldn’t be more complimentary.

I return to the piano and play Billie Holiday’s version of “Good Bless The Child”. A guy walks by and points at me and says, “that’s good,” and I stop to think that it’s very cool being downtown.