Forty-five years before author Dan Buettner popularized the term “blue zones” in an article for National Geographic in 2005 which explored five places across the globe where people live incredibly long and happy lives, my father preached many of the principles. 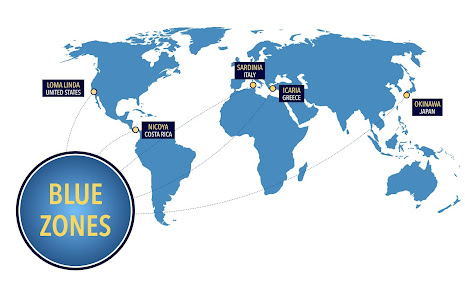 Our family’s first apartment was close to the downtown area so he could walk to the train station. The next place we had was further out but close enough to the elementary and middle school and even high school “…so you kids can walk to school.”

Buettner grew up in the Como Park neighborhood of St Paul and his father instilled in his four boys the same sense that the easy way is not always the best way. In his case, it was trips to the Boundary Waters for week long canoe trips and backpacking out West, according to interviews he’s conducted with various media outlets.

The funny thing is my dad’s approach was closer to the big idea that Buettner brought back from his travels to “blue zones,” places where people live the longest. It’s not the heroic gestures but the everyday things like walking to the store, chats with friends and making healthy food choices every day that equate to a long and happy life.

My dad’s incessant reminders of the importance of walking or riding a bike for trips to friends’ houses or even trips to the grocery store would have been easier in a place like Amsterdam rather than our small town in New Jersey. (No doubt Buettner, who holds three Guinness records for long distance cycling, would have made short work of these trips, but that’s not the point.) Living in Amsterdam would naturally lead to a lot more bike trips than living in a small town in New Jersey without bike paths.

According to a blog post by Buettner on LinkedIn, this is the key longevity secret: "If you want to live longer, don’t try to change your mind, change your surroundings." Food, exercise, social relations that add years to your life are all guided by where you live more than the choices you make.

Buettner synthesized the ideas and trademarked the term Blue Zones and his findings are used by the Minneapolis based organization which he founded to help millions lead longer and happier lives in what they call Blue Zones Projects.

I was pondering this idea one day while biking in the St Anthony Park neighborhood in St Paul, when I saw Mark Brancel, M.D., a local physician out for a barefoot jog. I flagged him down and mentioned the big idea that one’s environment trumps all other factors in determining health and well-being. He gave me a long look and said, "Unquestionably.  With one of many examples being a look at the whole current Covid situation where people are dying in greater numbers in some geographic places than other places…”

He added that he’d just completed a book on aging which he intends to share with friends and neighbors, but his ideas lean more towards individual choice rather than environment.
I sat down with Ross Jackson another neighbor of mine while working on this article in early fall. Jackson is a schoolteacher who lives in St Anthony Park but lived in Denmark five years ago and has been making trips back there ever since and may even move there.

In his 2017 book, Blue Zones of Happiness, Buettner selected Denmark as one of four happiness hot spots to profile because of its citizens’ high ratings for satisfaction, purpose and enjoyment as they go about their lives.

Jackson told me, “A lot of it is biking, but there’s more…the real connection is the built environment.”

He said there are facilities for youth, designed specifically for their needs, so they have places to go after school and be with friends.  Pre-schools are built next to parks or even embedded within them. Some have animals on site. In the downtown area of Copenhagen, he noticed a pre-school with the playground on the roof. He imagines these values are played out throughout the country.

“They see the whole range of childhood activities and try to support it.”

He said he’s impressed with the dedication of the adults he’s met that work with kids. He didn’t think they were necessarily paid a lot.

Denmark checks off all the right boxes the Blue Zones Project team espouses - government policies, a built environment, social networks, building design and residents who (especially) have a sense of purpose.

Can these ideas be transplanted and take root here?

They have. Albert Lea, Minnesota became the first Blue Zones city in US in 2009, making changes that led to a projection 2.9 years of additional lifespan after just one year of participating in the project.

In 2016, thirteen Iowa cities achieved Blue Zones certification and the state’s rank on the Gallup-Healthways Well-Being Index® improved two slots to 14th in the nation.

Today, there are Blue Zones Project places across the country, and there is little doubt the organization Buettner founded will continue to thrive as long as it brings results.

Rather than wait for city planners to adopt policies that will advance Blue Zones solutions that will “make the healthy choice the easy choice,” as they say on their website, I was wondering what an individual can do to get started today.

It appears Buettner has thought of this and will be offering solutions anyone can implement using a four-week challenge which will be published in book form in December of 2021 called the Blue Zones Challenge.

Doesn’t this approach sound like using individual will-power rather than living naturally in a “blue zones” environment?

When I asked Buettner about this, he replied: "No, the focus isn't changing.  The Blue Zones Challenge is mostly evidence-based ways individuals can shape their environment to favor unconsciously healthy choices.”

Many places in America abound in healthy environmental advantages already. Many places need work. If you want to live a longer and happier life, find or help create a place where you don't have to think too much about it.

A version of this article on the Blue Zones appeared in the Park Bugle.